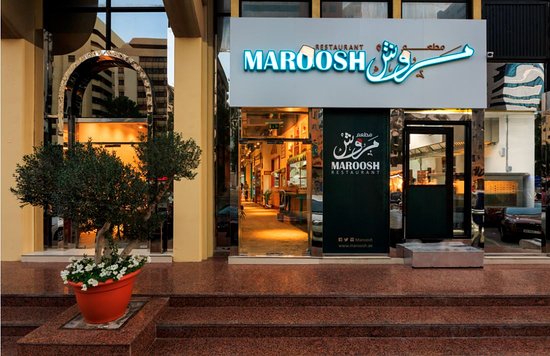 A burst of greenery announced Maroosh Restaurant, a Middle Eastern eatery with a pretty patio, enticingly colorful against the muted palette of the buildings that flank Hazza Bin Zayed Street. Fenced and lined by potted plants, the spot emitted an eye-catching aura—a  breath of welcoming fresh air and relief from the barrage of vehicles speeding on the road near Al Dhafrah.

The open-air seating was pleasantly homey, dotted by a handful of umbrellas, with a few comfortably spaced tables that reinforce the mellowed mood you will slowly slip into within. By the time I got to the main door, an employee had already noticed my presence and swung it open with a smile. Inside, a long counter greeted me on the right, while to my left, the room stretched to accommodate a vibrant assortment of multi-colored chairs with cozy, two- and four-person tables. With a glass wall facing the patio, sunlight poured into the space, helping further a cheery vibe.

I was handed a menu that offered a variety of the region’s cuisine, including appetizers that ranged from flatbread Fatteh to hot, meaty Fatayer, and from cold Fattoush to classic Hummus. Mouth-watering pictures interspersed a well-structured list, but the Shawarma and Grills interested me the most. Eventually, I ordered a Kabab Sandwich and the Chicken Shawarma Platter with a soda, unwilling to order more, given the daunting portion-sizes on display.

It took roughly ten minutes for the first of the food to arrive: the salad, bread, and sides, (the non-meat portions to my platter), as well as a can of soda. In the meantime, an employee helped me connect to the internet. Soon, my actual appetizer was served. Wrapped snugly within two layers of paper, I unraveled the roll with glee before biting into the flatbread wrap. Immediately, thick, textured hummus fused with soft, spiced kabab meat, moistening and flavoring the starchy bread as I chewed my first bite, setting off my taste-buds in a protein and carb-laden frenzy. What could have easily turned into an over-rich, meaty extravaganza, however, was balanced within the next few mouthfuls by the tomatoes and greens. Lacing the dish with a fresh vitality, the vegetables cut through the hefty creaminess and reunited with the light, fluffy bread. As I finished eating, impressed by the sandwich’s structural integrity, I appreciated how different food groups had worked in sync to contribute to my enjoyment of the dish—a testament, indeed, to Maroosh’s kitchen.

The chicken arrived seconds after I was done, while an efficient staff-member removed the remnants of my last dish. In its totality, the main course was startling in quantity. Salad, bread, fries, sides, and a shockingly generous helping of grilled chicken—enough for two, yet under forty dirhams. I opened one of the packets cleanly storing the flatbreads and began creating my meal. The deconstructed shawarma opened up a world of possibility as I tore up bread to have with hummus, wrapped some chicken in it, and then finished off with a bite of the salad. The bread was fresh, the greens juicy. The tahini was tart, the hummus creamy. Maroosh gave me high-quality ingredients to bring together as I wished, centered around the flavorful pièce de résistance: the chicken. I sipped my soda in between mouthfuls, eating with a fervor. My considerate server checked up on me a couple of times to see if I needed anything.

In the end, I was defeated by my meal. My server packed it up for me to take away—food too good to waste. I paid the bill, stuffed and beyond satisfied. The affable staff bid me adieu. As I walked back onto the sidewalk, I felt myself returning to a roadside that felt drearier than before. It took me a moment to realize that I missed Maroosh Restaurant’s charm.

It emanates with a wholesome friendliness. An approachable sort of warmth, of good food to share with good company – a definite must for anyone looking for reasonably-priced Middle Eastern cuisine, or just a nice, relaxing meal in Abu Dhabi.